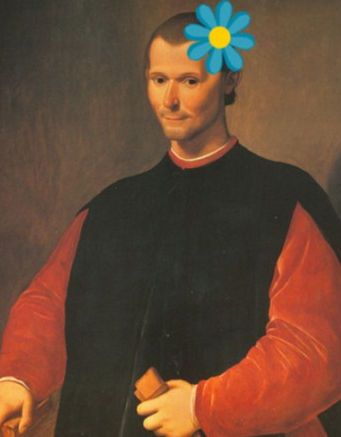 In 1513 Machiavelli provided a seminal analysis of the flow of power in Europe. The ideas defined in “The Prince” have inspired political thinkers ever since. At the time his acute, perhaps cynical, understanding of power, made him notorious, and his works were added to the Vatican’s list of banned literature. Today his name has become a byword for manipulating, perhaps evil, genius.

Yet his ideas may help you with local grass roots campaign strategy.

In Chapter IV of The Prince we are told about the fates of the Kingdom of France, and the Turkish empire. France is a feudal country, led by a king, but also by noblemen who have their own authority. The king has some lands he controls directly, but the majority of the country is owned, taxed, and defended by his nobles. These lands even pass in and out of the nation as allegiance with the king ebbs and flows. So while France is described as one country, the nobles in fact hold much of the characteristics of a king and power is highly decentralised.

Turkey is very different. Having seen a process of total centralisation, all land is controlled and taxed by the emperor. There is one military force, and although power is administered by many, it is done so on behalf of their despotic leader. There are no feudal lords to stand up to the despot, and a single bureaucracy and national identity provide a stronger sense of cultural and political unity.

Machiavelli tells us that France is easy to invade. Small, less powerful lordships are easily defeated and with them a part of the country falls. Alternatively, the favour of local lords can be bought.

Turkey is very much more difficult to invade. A centralised army is an effective defence, and there are no significant powers other than the despot with whom one can buy favour.

However, France is a lesser prize: if you fight or bribe your way through France and succeed the king, you do not hold power easily. Local lords must be kept happy and regions may easily fall under the sway of neighbouring powers.

On the other hand, if the emperor of Turkey is toppled, his power can be held. A centralised state provides the same power that made it so difficult to invade.

Between the Springs of 2009 and 11 I spent two years working for Transition Edinburgh University, a community group striving to, through behaviour change and campaigning, make Edinburgh sustainable.

The University of Edinburgh is France in 1513. Colleges, departments and faculties are independent and proud. They have considerable control over their own spending, staffing, use of space, and policy. Many have a strong sense of identity, particularly those which have been more recently incorporated into the University, such as Moray House, who rarely use the name of their parent.

Queen Margaret University is Turkey in 1513. Power flows from the central management and departmental independence is minimal. Budgets and policy are decided by the core and the sense of identity is with the University, not departments.

Hence, when I visited QMU’s Sustainability Committee as a guest, I was knocked back by the speed and ease at which they were able to affect changes within the university. There were no departments to convince, no toes to tread on: policy agreed here was policy everywhere.

Back in Edinburgh, we spent years trying to effect such changes. Policy may be agreed centrally, but it had little effect unless colleges and departments were convinced of the benefits of implementing it. We had to talk to many staff, at many offices and campuses, to make changes.

As such, I often found myself wishing we could have it like QMU – like Turkey. Sometimes it might be harder to convince those in power, but once we had, the job would be done.

But perhaps, this is where Machiavelli got it wrong.

Through might you may have taken power in Turkey, but power without consent does not endure. Lasting governments are connected to the people, and here the Turkish empire fell short. Local nobles force you to do what you should regardless: build authority with a wide base.

In the same way, social change is poorly achieved by a centralised power base. The need to go department by department at Edinburgh University required us to set in motion a much wider and more significant cultural change in our community. We need structural changes put in place by a central power, but they will not affect the true lasting change we seek without a contact with the community. We need people to change the way they think, and that is not done by a passing decrees, but by holding discussion.

You may spot these pattens in the institutions you are trying to change – businesses, local councils, national Governments. Understand the distribution of power and you will be close to affecting policy and physical changes. But beware – there are no short-cuts to changing hearts and minds.