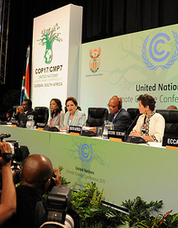 If a successful campaign needs a story, then since 2009 the global climate movement has been in deep trouble.

We certainly started off with a great story. I love to tell it to people all the time. Gather round kids, I say to fresh-faced activists and strangers in pubs, listen up – here’s how we changed the world. In the early noughties the UK and Scottish Governments were somewhat interested in climate change, but they were pretty convinced that we didn’t need new legislation to tackle it. “Leave it to me”, said Tony Blair, “the climate is safe as long as we’re in charge”. We didn’t agree, and after a monumental protest, lobby, and direct action campaign the Climate Change Change Act and Climate Change (Scotland) Act were passed with cross-party support in both legislatures. Onwards and upwards. Gordon Brown then created a cabinet level position for Climate Change, a move which remains somewhat unique internationally. With our climate bills in hand, the then minister for Energy & Climate Change Ed Milliband, went to the UN Climate Change Summit at Copenhagen. We’d set the course for the UK, and now we were going to lead the world!

That’s where I tail off a bit. Time for another drink. Because we don’t have a story for what happened next. We made our ministers be bold: they had to be, because if the world didn’t join us in the fight against climate change, then UK industry would have been at a disadvantage. So since 2009 British delegations to UN climate negotiations have tugged and dragged and hauled the efforts of the rest of the world along, but apparently to little avail: what have we ended up with? What do we have to show for our leadership?

In 2009 a maelstrom of campaigning was whirling towards Copenhagen. We put all our hopes in a legally biding agreement, and the climate movement was left bewildered when it failed. NGOs pulled their money out of the Stop Climate Chaos Coalition, so crucial to getting our climate legislation in place, and as a weathervane for the movement as a whole, activist-film maker Franny Armstrong redirected her organisation’s considerable efforts from political action to behaviour change with the 10:10 campaign. Friends of mine who were at Copenhagen said its failure made them reconsider their efforts: the UN process was always doomed to failure, they said, and we should have put our efforts into other things. It was in this haze that the transition movement took centre stage. Franny was right, they said: we need local-scale change first.

I do not agree with this version of the story. It says that Copenhagen taught us that we were wrong to bother with the UN. That international cooperation was never going to work, and that taking control locally is more effective. This is false. If it was true, we didn’t need a failure at Copenhagen to make us see it. There are greens who’ve been doing this work on the ground for decades. It has never led to successes on the scale of the climate change acts, or a global deal at the UN, and it won’t in the future either, without being linked to wider scale action. Copenhagen hurt because we needed it to succeed, not because we were wrong to focus on it in the first place.

At the talks in Durban last week, delegates pushed exhaustion to new heights to agree a loosely worded set of agreements:

Clearly these agreements are entirely insufficient to deal with the problem at hand. But when questioning our efforts we must ask: how would things have been different if we hadn’t made the UK pro-active in these talks? Would anything have been agreed at all in 2009? With no previous agreement that we needed to keep warming to under 1.5oC or 2oC, we would have had yet another obstacle to climb over at Durban, and perhaps the wording would have been weaker, the numbers just too loose.

At the very least, there is now a crack of light through the door: we need to claw it open with everything we’ve got. By pushing coordinated Government-level action in the UK we can keep pressure on the UK, and the UK in the EU, to get other countries to step up. To ensure other countries stay with the Kyoto protocol; to get Governments to up their commitments in the Copenhagen Accord; and to make sure that when everyone is tired beyond humour, the UK Minister for Climate Change is still there, nagging, disputing, and refusing to give up.

This does not mean giving up on local action – but it does mean putting it in context. If we’re creating local food networks, we should be asking our leaders to stop subsidising big supermarkets. If we’re fitting insulation in people’s homes we should be getting the government to pay for it. If we’re asking people to take the train rather than fly, we should be telling Government how many more would do if they could afford to. If we want to rebuild our entire towns and cities to make them sustainable, then we should be sharing this struggle with our decision makers, and asking them why they’re not making it easier. In the fight against climate change there never was a place for isolated change, and we mustn’t allow our frustration with the pace of international agreements to convince us of otherwise.

There is still a chance that in 10 years time, I’ll be able to drunkenly tell a new generation of plucky activists and random strangers the full story. That we passed a climate change act, that we took local action, and that we used both to keep our leaders totally sure that there were a lot of people waiting to vote them out if they slipped up. In doing so, the UK led the EU and the world, helped sign into international law agreements which safe-guarded our climate. It’s an unlikely tale perhaps: but as of last weekend, it’s not impossible – and just like at Copenhagen, we don’t have any other option – so we better try our damndest.

For another explanation of why we need internationally coordinated action on climate change, read the post below:

The world’s scariest news? Methane bubbles from the arctic ocean