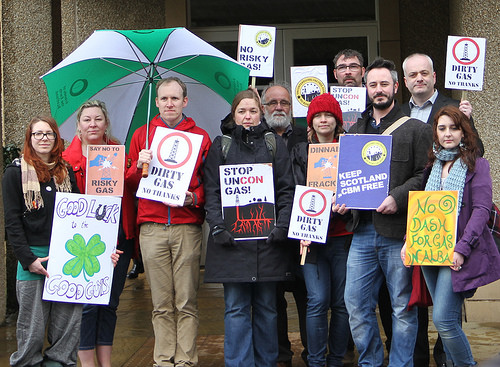 The Scottish Government called the inquiry after the troubled Australian firm Dart Energy appealed to speed up Falkirk and Stirling Councils’ planning process for their coal-bed methane drilling proposals.

The month-long process will have major ramifications for new gas drilling across Europe.  Photographers and TV crews gathered as well-wishers welcomed communities members participating in the inquiry (pictured).

Concerned Communities of Falkirk have collected objections to the proposals from 2,500 local residents.  They will submit evidence through a variety of experts, as will Falkirk and Stirling Councils, Friends of the Earth Scotland, and Dart Energy themselves.

The first session begun this morning with evidence from Dart’s own engineers.

John Spears and Andy Sloan, who admitted they expect to work on the developments if the application is approved, told the inquiry:

The Reporter (Chair) from the Scottish Government agreed that the closing statements alone will take two days.

While Day One of the the proceedings unfolded at the Inchyra Hotel, MSPs in Holyrood debated the current planning framework.

The Scottish Government have proposed to introduce buffer zones around onshore drilling sites to protect homes and businesses, but are yet to announce how big they will be.

The inquiry continues and you can follow events in the room at #dartinquiry.

This article was originally published on Bright Greeen.