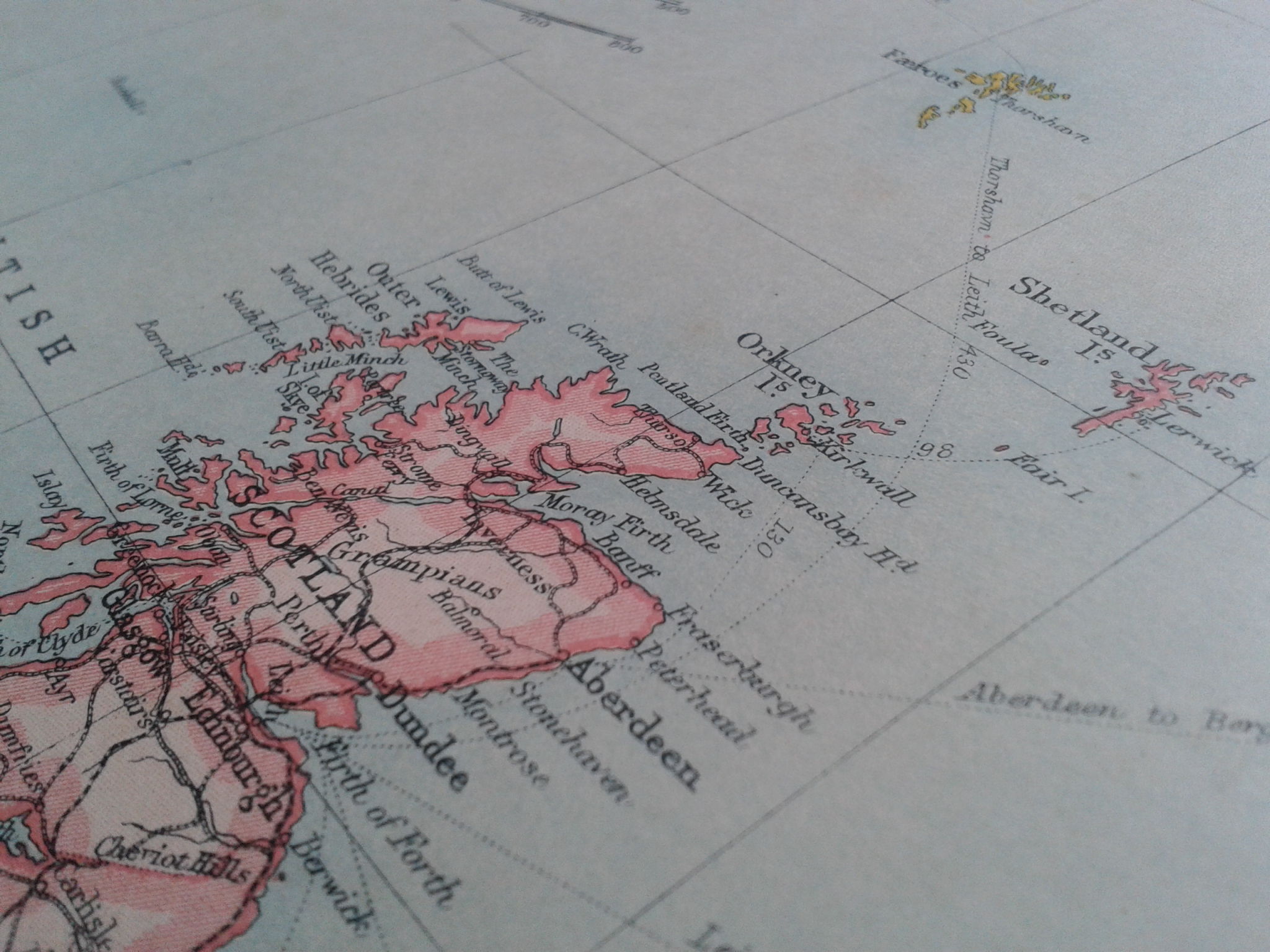 The spoils of 308 years of struggle

Last night, referendum eve, I was at a local Greenpeace talk with Benny Wenda, exiled West Papuan leader, speaking to our little crowd of 15 or so about how he escaped his Indonesian Jail, ran for two weeks to the border, and escaped using a fake passport to Britain. Benny has been fighting for his people’s freedom from the oppression of the Indonesian government and European mining companies, watching from a distance while activist after activist has been murdered. They have given up their lives for one cause: for West Papua to have a referendum on independence.

It certainly put things in context.

After the meeting I left out onto the Grassmarket. This part of the Old Town looks its most mediaeval in the mist, and there was thick fog last night. I was reminded of the violent mob of Edinburghers who roamed the streets some 308 years ago, seeking the meeting of MPs where the Treaty of Union was being ratified. At the end of the way, on the spot where prisoners at the time were executed by hanging, a group of folk in matching red t-shirts were chanting at passers by, something like “please vote no”, in an aggressive tone. Perhaps tonight had echoes of history? As I got closer I realised the mixture of fog and political fever had played a trick on me: this was not a NO THANKS mob: Napier University freshers students were chanting “drink the shoe, drink the shoe”.

Whilst utterly historic, this is an independence referendum apart. No blood-loss, no struggle. And a lot less nationalism than outsiders might expect. This has not been a battle of Britain vs. Scotland, Union Flag vs. Saltire, and anyone who sees this is viewing conveniences and missing joyful subtleties. The Police even intervened this week to tell us all just how civil this debate has been.

As I climbed the cobbles along mostly quiet streets, all passers by were discussing politics in bright terms, despite the dark and the weather. Phrases like “written constitution” and “tax reform”. Not an ordinary night.

I passed Parliament Square and Moray House, rumoured site of the secret signing of the aforementioned Treaty. I thought of all the people who devoted their lives to give the people their due rights. 18Th century reformers like the Edinburgh Society of the Friends of the People exiled to Australia, and the chartists, the suffragettes, and those who campaigned for Scotland’s parliament.

As Justin Kenrick points out no matter how we vote today we continue this historic tradition. We will be the first people to have the chance to vote on what was signed 308 years ago. And in doing so we will create a new Scotland: a country which, joined to the UK or not, has the approval of its people.

What a privilege we inherit, that after all this struggle we may put a cross in a box.

Tomorrow we must honour this inheritance. In West Papua, in Scotland, and across the world, the fight continues.

Wow! And that was just the start!

On a sunny day two years and four months ago in a multiplex in Fountainbridge (the sort of sunny day Spring day where you’d think “this is no day to be cooped up in a cinema”) Alex Salmond, Sean Connery and celebs and politicians launched the Yes Scotland campaign. It was slick, carefully scripted, comfortable, reassuringly respectable. It was everything the campaign turned out not to be. We were not inspired.

Enter the Radical Independence Campaign. A ball of young socialist energy, RIC got organised in 2012 holding two incredible conferences in Glasgow, building support around proper, radical political ideas, registering working class voters by the thousands and galvanising a support base of confident, internationalist fighters. RIC always said that independence could just be the start. Well it’s been an amazing infancy – taking part in its blossoming promises to be something incredible. We’re seeing the rise of an organised left in Scotland. It’s been a while.

So many wonderful ideas have come to print over this campaign. Blogs have positively buzzed with brilliant radical discussion from all political hues. Writers and journalists have given us much to cherish, mentioning Lesley Riddoch, Gerry Hassan, and Iain Macwhirter to name but a few.

The Jimmy Reid Foundation, now at the brink of a split (or more accurately, a productive explosion) over the referendum, has provided much needed clarity of purpose. Their Common Weal project is the closest thing we have to a manifesto for a better politics, and is an essential contribution to Scottish political discussion no matter what happens in the vote. We are now equipped to talk seriously about land value tax, breaking up the banks, nationalising transport, a renewal of Scottish industry, and many other crucial ideas.

And there’s the dreamers: the artists! Wow! Have you ever seen such a creative outpouring? The artists got organised in National Collective, and what a force it’s been. The Yestival tour solidified independence as a creative movement for change as well as a solidly political one. I have been amazed by the poetry, the music, the public art, the wonderful posters, badges, and murals. There has been brilliant comedy too. Art has an ability to get to the heart of an issue in a way cold text always falls short. That goes for comedy too, as the wonderful Jonny and the Baptists proved.

The Green Yes campaign has shown much needed alternative from within the elected parties. The Greens, who risked much taking on the fight despite their traditional light-green base, are now full of fresh momentum. Without the Scottish Greens there would be no voice espousing a wealthy, equitable, green powered Scotland as an alternative to the black black oil bonanza of the SNP (and most other UK parties). A party official told me yesterday they’d had 50 people join in one day. Brilliant.

I’ve had the pleasure of hearing speakers from Women for Independence, Farmers for Yes, Third Sector Yes, So Say Scotland, Christians for Yes, English Scots for Yes, and many, many other national groups and local branches of the same over the last two years.  Even my devout anarchist friends joined the campaign – and voted.

This is a genuine mass movement, of the likes we’ve not seen for a long, long time. Walking by the National Gallery yesterday I was surrounded by strangers having deep conversations about political change. In the context of history, the significance this nation-wide discussion should be fully understood to be on a par with the Putney Debates.

Today in Scotland the left is better organised, more energetic and clearer minded than it ever has been. Why?

Someone recently asked me why the AV referendum didn’t spark such excitement. I have also heard folk say “why should we need a referendum to have all of this excitement about politics”. The reason is not opaque: we were being offered meaningful change. Being given the opportunity for something different, no matter how risky or challenging it might be to bring about, was was the starting gun for this spectacular constitutional carnival.

The clarity of purpose of friends joining the campaign from elsewhere has buoyed us no end. Joe Greenwood, who campaigned with us last weekend, told us why this could change England too. To put it simply: “we have a chance to quake the British state and establishment to its core – how could we pass it up?” Along with the contributions of other rUK groups such as Red Pepper and Open Democracy, momentum is building around the idea that this could be the starting gun of England’s own renewal movement. To answer Josie Long’s call for “England to have its own referendum”, Scottish independence could yet provide the space for political imagination, so sorely needed south of the border.

So as Ken Ferguson points out in the excellent Red Pepper magazine, either way we have won. The referendum has unleashed colourful and powerful political forces which will not be contained.

We are better organised and ready to make a difference. Today turnout will be the highest in Scottish history. These new voters will not be voting for business as usual when we are next asked to elect a parliament.

We have built a movement for change that will no longer be satisfied with slick, carefully scripted, comfortable, and reassuringly respectable politics of two years ago. We are anarchic, creative, radical, powerful and utterly earth shattering and, no matter what happens tonight, we are now ready to change these islands for better.

6am. Rain and fog. Edinburgh Park and Ride. Defeat.

It’s a long way home from there.

We had just witnessed the count for the Scottish independence referendum and we lost. Unambiguously.

I had often felt it unfitting to end this two year carnival with a simple yes/no X on a slip of paper. The definition of an anti-climax. Such a process is utterly incapable of containing the hopes and dreams we have for our country.

And yet of course it did matter. A lot.

On the tram journey home we tried to talk ourselves out of despondency. Sometimes we slipped back. A tear was shed, or two. Yes posters we passed didn’t help. I had a feeling that after all the excitement someone had pressed a reset button. Back to square one. No more political imagination.

But as we chatted and pondered a clearer picture began to emerge. One of a Scottish electorate standing up to take part. One of millions of people making bold decisions. A story of people not doing what they were told, and believing in something different.

Despite folk being told that voting Yes would mean migrants being thrown out of the country, exclusion from the EU and the pound, indeed the very demise of the Scottish economy, despite all this an incredible 85% of our people voted and gave 45% their vote to starting a new state.

As the dust settles that fact will remain. And with it, Scotland is a changed place.

The many thousands of new people who took part in this election will shape our politics completely beyond recognition in the coming months and coming elections. It is vital we encourage and help them in doing so. This is a time for movement building. We need to be asking Yes voters to join a political party, join an activist group, join lot of groups. Time for holding a meeting or starting an email thread. Let’s conspire, plan, do things and with new people. The momentum can build from here. Get your favourite books and blogs back off the shelves. Find the politics we can build on with the opportunities we do have.

Constitutional reform, a renewables revolution, citizens income, land value tax, free child care, democratic local banking – all within our reach if we can stay organised and reaffirm our ties (and make new ones) with organisations across of the border.

We must be prepared for a UK General Election where all the “main” parties are pledging further austerity. With new tax powers a Scottish Parliament could block this to a point, but we’ll need all our momentum from this campaign to win.

Of course the election mattered. It was huge. It was amazing. It scared the crap out of UK politics. But as Danny Chivers puts most wonderfully “every day is election day”. We are not done yet.

Need some inspiration on what to do next? Here is just a smattering:

National Collective, Radical Independence and People & Planet are all hosting meetings in the next week to decide what to do from here on. Others will be too. Take the weekend off. Then get ready to get involved in something.

These blogs were originally published in three parts. You can access them in their original form through this article on Bright Green.