By Gemma Bone and Ric Lander 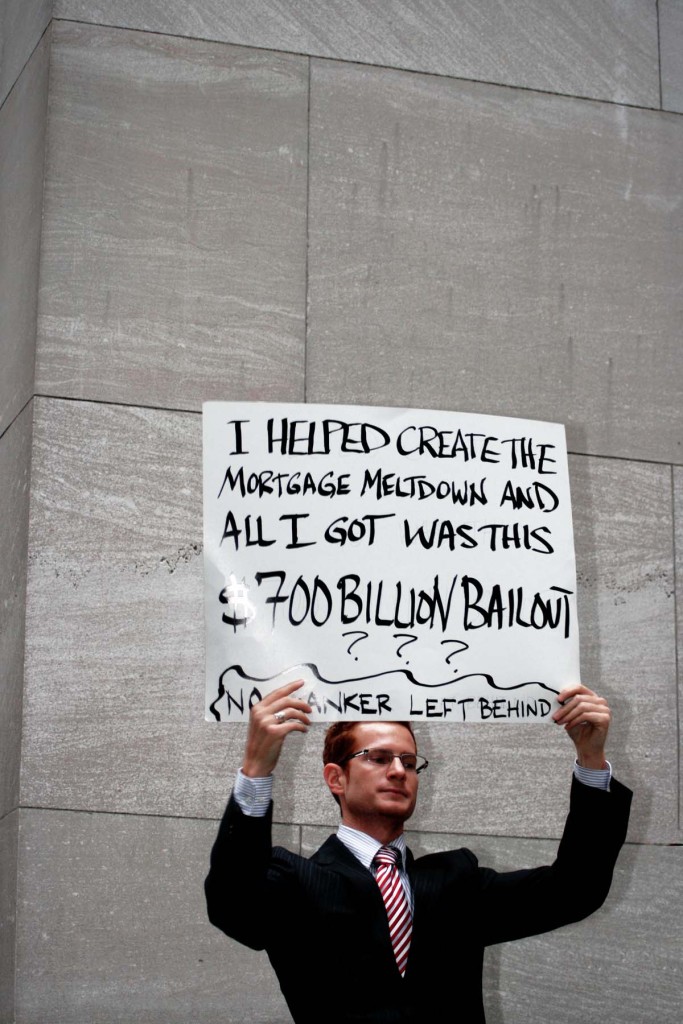 If we want social change we need to think about finance. To create a society that lives within natural limits we need to fit together some proposals about how we can sustain people and their communities, what infrastructure we need to reform, remove or rebuild, and how we’ll supply the resources we need. We also need to have some pretty bright ideas about how we instigate this change.

Banking and finance should provide the mechanism by which we move around resources in society to instigate such changes. However neoliberal reforms have created a “financial industry” which serves itself and capital – not society. This industry is now the most significant barrier in the way of our efforts to create a sustainable society.

Divestment, the campaign for public investments to be withdrawn from fossil fuel companies, is a first step in challenging this system. It is a shock tactic. The finance and fossil fuel economy, defended by global financiers headquartered in the City of London, a creaking but towering political consensus at Holyrood and Westminster, and its arms and legs: oil, gas and coal companies, will not and cannot be redeployed to invest for the future by gentle persuasion and reasonable argument. So it must be undermined. Divestment allows our institutions and communities – places which are by their scale and nature more human, more responsive – to mark out their territory as moving apart from the fossil fuel power block and part of something new. In doing so they create political and cultural pressure for new thinking.

However this really is only a first step, or rather, one side of the coin. If divestment is the withdrawal of vast sums of money from businesses and organisations which are destroying our collective futures, then we are left with the problem of reinvestment, i.e. where can we channel divested funds to kickstart the radical change that we really need. In other words, if we want a future where society thrives within ecological limits we need a massive redeployment of resources, not just from small public pots, but from big finance too. Our self-serving “financial industry” as it currently stands, is not capable of thinking sustainably over the long term. So banking and finance must be reimagined, redesigned, and rebuilt as democratic and accountable services.

But where do we start with what seems like a colossal challenge, finding alternatives to the neoliberalised finance system? Firstly, we must remind ourselves that even in the UK, which has one of the most concentrated banking sectors in the world, there are some already existing alternatives which are, in some way, ‘better’ than the mainstream. There are the ‘disruptive innovators’ seeking to create new business models which place environmental and social justice at the heart of their practice. The relatively new crowdfunding industry for example, has the potential to circumvent some of the power relations of finance, enabling projects, businesses and renewable technologies to be funded by the ‘crowd’, crucial when bank loans are hard to come by.

Secondly, we can look to other business models for inspiration including the quiet strengths of those local mutual and savings banks who have managed to hang on throughout the ‘big bang’ of 1980’s regulatory reforms, and newer, more ethically focused financial businesses such as Triodos and Abundance who focus specifically on channelling resource to renewable energy production. We can also look to other countries banking structures which put diversity and locality at the (regulated) heart of what they do, such as the Sparkassen in Germany, a network of publically owned and regionally accountable local banks.

What these brief examples show, coupled with the successes of the movement towards divestment, is that there is a cultural push for a systemic change in finance. We no longer expect or accept that the only duty of finance is to create profit no matter what. Divestment campaigners, disruptive innovators and mutual and co-operative supporters are showing that other motivations and values are not secondary, they can and should be at the heart of the purpose of banking and finance. They are challenging the sovereignty of the profit maximisation principle and show that finance is not free from the demands and responsibilities of social and environmental justice, but that instead it can play a crucial role in creating a better society for us all.

This is a huge challenge, but the more we make finance accountable and democratically controlled, the more opportunities we create to invest for the long-term in a thriving sustainable future. We can start this journey by reforming the investment practices of public investors, and setting up community banks and other institutions which can take over and attract investment whilst creating and enabling the fulfilment of social and environmental needs. We need to stand against irresponsible and short-termist finance, take back our collective power and continue to take action on multiple fronts, as pension-holders, voters, consumers, opinion formers and most importantly, citizens.

This article was originally posted in Issue 89 of the Scottish Left Review.