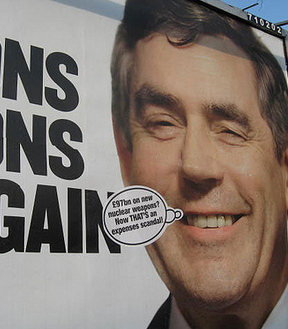 Don’t just vote with a cross (seen in Hereford).

The internet is a wonderful place to share ideas. It’s an even better place for sharing inane crap. Sometimes the two crash together to create something quite brilliant, like wikipedia and last month’s hilarious tory-advert meddling at Mydavidcameron.com. The net’s utterly anarchic structure, having something of Somalia’s law and order and the rest of Singapore’s economic controls, make it open to virtually anyone to build their own spaces. More recently, social networking tools like facebook have actively invited people to create new spaces.

There are virtually no rules and limitless space. Messages travel fast and uncontrollably through these spaces as humans flit and float between them, carrying and copying bits and pieces about the place so those who create quickly lose track of their creations.

This is not an environment becoming to ramming ideas down people’s throats. Instead they are shaped, packaged and carried away by anyone and everyone as they see fit.

This is bad news for wealthy organisations who want to control their message. Compare the e-universe with the cold and rainy real world – a place of of limited space and tight controls on how and who can use it. Walls and doors and owned and space is a valuable commodity.

Enter the political billboard, a 6m+ diameter slab of brash, exuberant, eyes-staring and eye-catching propaganda only affordable by the most hefty political machines. Where a Youtube video becomes parody within hours, and that which doesn’t is lost down the bottom of the news feed, the billboard remains, every morning, every evening, every time you nip out to the shop.

As well as being a more controllable space it is reaches more broadly. Working class swing voters won’t be posting Cameron’s latest blog post on each others Facebook walls, but for a few thousand quid Conservative HQ can write their chants in towering black letters on the main road into town.

The good news is – so can you. Like all follies, billboards are intended to be a sign of power, yet are ripe for being undermined. All it takes is a pen.

In what is probably the most important election since punk the form is still thriving. What is more, according to a recent survey* punters are 1000% times more likely to notice an amusingly styled community-added moustache than a corporate politics-designed airbrushed face. If that is a the case then there are a lot of canvases for us to go campaign the hell out of out there.

Subtle, and it undermines. The jester, seen at Dalston (top) and Exter (bottom).

Funny, and it demeans.

Not neccesarily quoted off Mock the Week (seen in Exeter). Plain frightening may be even more effective. Seen in Aldgate, London.

The internet is wonderful for organising, but the real world still can’t be beat for reaching people. Every billboard, be it advertising political parties, oil companies or the army, starts life as an way for someone with money to get their views across. But they also represent an opportunity to get your views across. So go grab a pen – there’s still plenty of time to vote before election day.