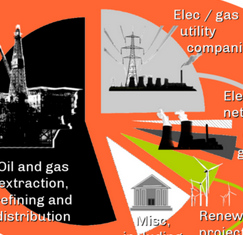 As private shareholders gather for the RBS Annual General Meeting in Gogarburn today, there will be an elephant in the room.

Majority shareholder, the UK Government, whose portion is managed by treasury-owned “UK Financial Investments” will not be using their power to stop RBS undermining Government policy to reduce carbon emissions.

Research I helped produce with Friends of the Earth Scotland published in the Guardian on Monday shows that RBS were involved in lending 67.3bn bn of loans to energy and power companies between October 2011 and March 2012, more than half of which was lent to oil and gas corporations. Only 5% went to funding renewable energy projects.

This comes only a week after the UK Government announced ambitious plans to reduce carbon emissions from UK electricity generation, including a reduced reliance on coal.

The research unermines the Coalition’s claim that returning RBS to profitability should be the only aim for UKFI. RBS’ loan activities directly oppose Government efforts create a sustainable economy, and will increase the cost of the impacts of climate change on the UK in the future.

As well as increasing carbon emissions, companies which RBS has recently been involved in funding have had been under fire for corruption and human rights abuses. The RBS AGM will take place away from prying eyes this afternoon at their out-of-town conference centre, RBS Gogarburn near Edinburgh.

RBS customers under the spotlight:

(All new data from Friends of the Earth Scotland / Thomsonone.com, see FOES online)

This post was originally published on Bright Green Scotland.