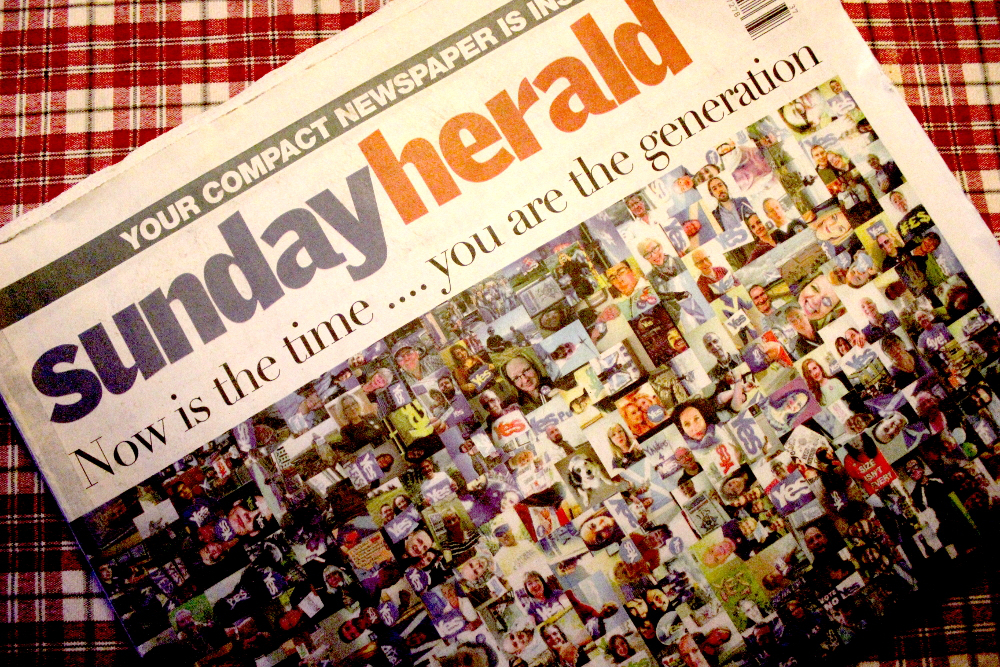 The Scottish media is in crisis.

Except for the Sunday Herald (exceptional for other reasons too) every national newspaper has seen dramatic falls in circulation in recent years. They have become machines for reprinting corporate and political press releases, stripped of journalistic resource and critical analysis.

BBC Scotland has been under relentless attack, quietly from unionists, and very publicly from Yes campaigners this year, and it’s not going away. Hundreds on Twitter have pledged to cancel their licences over perceived bias and misreporting.

This is to say nothing of the scandals that have rocked the media UK-wide and the embarrassment of the Levenson enquiry.

The credibility of the mainstream of Scottish media has rarely been so low. They are trusted by perhaps fewer people than every before.

The last year has of course been one of success for alternative media sources, including pro-Yes blogs such as Bella Caledonia and National Collective.

Much is also said of the role of social media. A new world of citizen journalism where Twitter lets everyone report what they’ve just seen or just thought, which everyone can read, anytime anywhere. In this world the morning news in print is already long out of date. If a a week used to be a long time in politics, a day often now seems like an age.

What does this new world pay to meaning, investigation, professionalism or verification? Not much. Barely anything is kept and recorded. The ephemeral is all, substance and reputation are cast aside. And the money and resource to fund our media keeps falling.

Must we choose between a dying bloated dinosaur and a swarm of flies?

Of course we mustn’t. In fact it is an imperative that in this hour, right now, we get to work on building a media that is fitting of a democratic country.

Robin McAlpin (Common Weal), Dom Hinde (Post Mag), and Sarah Beattie-Smith (Bright Green) discussed these problems and offered their ideas for the future at the 18th Independence and Radical Bookfare in Edinburgh on Saturday.

They charted the dire state of our print media, with rumours of 50% job cuts coming at the Scotsman following years and years of decline for the paper, mirrored by the Herald’s similar decline.

We heard of the sad loss of organised radical media such as IndyMedia and Schnews.

We heard of the frustration of the public in the referendum debate, unable to find a source of information that gave them the honest news they needed (Sarah told us about a taxi driver who said he watched three news programmes every day but still didn’t feel he had enough information to vote for independence).

We heard of the rise of new blogs in distributing comment and opinion, and equally their inability to provide news and investigation, something only professionals can do sustainably, and is sorely needed – Robin McAlpine said there were now around 1.5 full-time investigative journalists in Scotland.

We also heard that there is no media business model out there which is working in the 21st century.

Where do we go from here?

These are exciting, fractious and tectonic times.  Something must rise from the ashes.  But what?

A number of organisational structures were proposed. Dom Hinde was interested in creating a new media group in Scotland as a not-for-profit trust, similar to the Guardian in England.

Robin McAlpine appears to be thinking along the same lines, but his primary concern was to focus on news. He announced that the Common Weal is creating a new media platform called “Common Space”. The core of the project will be the employment of 4 full-time staff who will write and research “the news stories which are currently being ignored”: on radical, non-party, politics, economic and social policy, poverty, alienation, and new forms of organising.

Bella Caledonia (whose Director Mike Small was speaking later at the festival) have announced a new role in media training.   Common Weal and Bella Caledonia have also announced many other, sometimes overlapping, proposals and plans (click the links to read them).

The Scottish Green Party is currently gathering ideas for a new cultural policy which surely must consider the role of the media.

It could include big ideas like devolving the BBC, setting up a government voucher scheme for media, and finding public money to fund journalists, rather than newspapers, also discussed by the panel.

Sarah Beattie-Smith reminded us of the gains to be made by working within existing mainstream – in the last two weeks BBC Radio Scotland and TV’s Scotland 2014 have had seven Radical Independence and Green Party spokespeople on different days.

And what of the tradition of the objective journalist? Robin was unequivocal: “objectivity is dead. No honest journalist can pretend they’re neutral. Instead we need to be honest about where we’re coming from.”

Where does this leave Bright Green?

In the next few weeks we’ll be unveiling our bright new editorial team, a new design and designers, a new manifesto document, and much more and varied content – including news straight from the social movements we are a part of.

It’s just a small part of making a better media. What do you think?