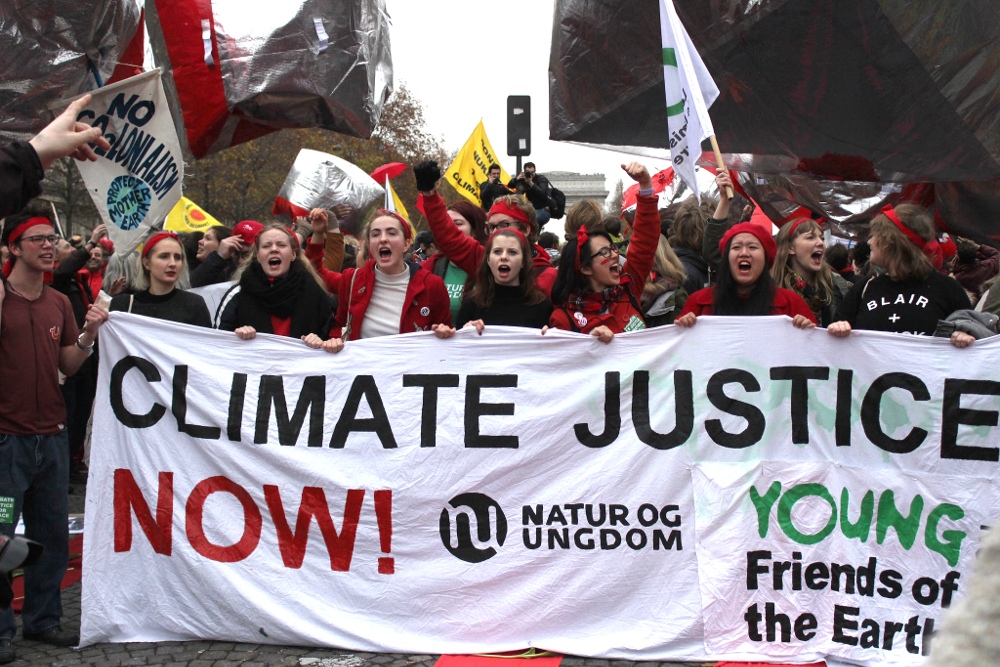 People from Norway marching in Paris on Saturday as part of “Red Lines”, organised by 350.org. Photo: Ric Lander.

Climate change is predicted to kill 250,000 people per year from malnutrition, malaria and other effects from 2010 onwards. These people will predominantly be the poorest.

Rising temperatures and changing weather patterns threaten the life support systems of vulnerable people and will cause an unprecedented global mass extinction of species.

These changes are mainly caused the the burning of fossil fuels by the worlds’ rich. These fuels are extracted, refined and sold at great profit by private and public companies.

250,000 people every year: a threat so great that world leaders have spent over 20 years deliberating over a solution.

Must politics move so slowly? 130 people are killed in Paris in November, and the UK Government is willing to commit to avenge their deaths in a bombing campaign approved so quickly that the payloads were falling inside of 3 weeks.

Clearly we have a problem, and it’s not just to do with our climate.

Did the deal cut on Saturday solve this problem? Not on your nelly.

The words missing from the Paris Pact: fossil fuels

This number, 1.5oC is both the boldest part of the pact and its deepest betrayal. The very basic aim of the pact – to keep greenhouse gases in the atmosphere at a safe level – is totally incommensurate with promised national emissions cuts. The pledged cuts in greenhouse gas emissions, and lets remember how rarely such pledges are kept, add up to a catastrophic 2.7-3.7°C of warming. 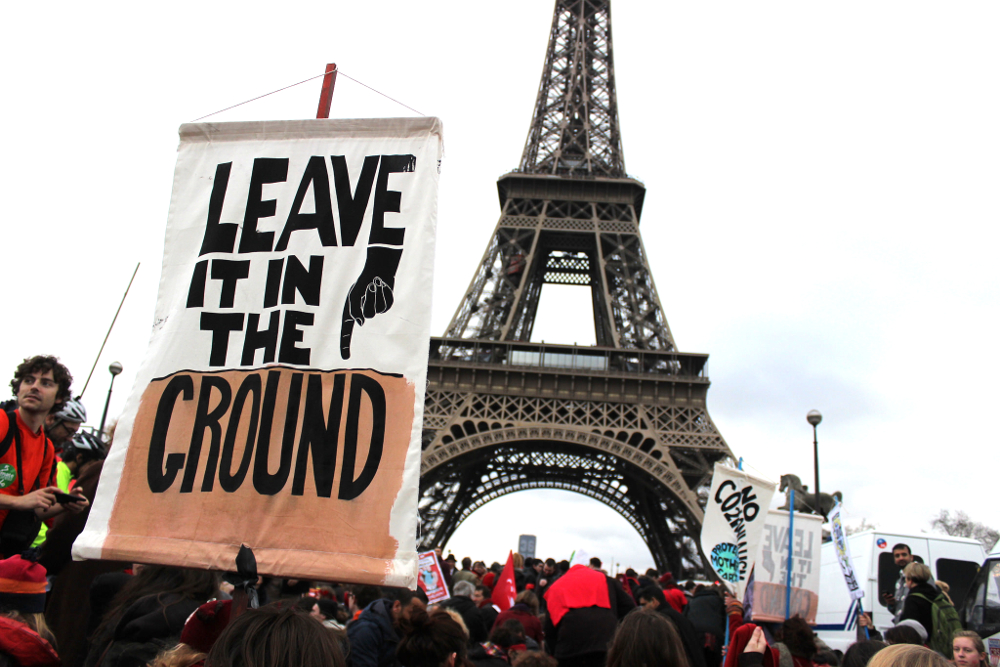 Protesters call for an end to fossil fuel use at the Eiffel Tower. Image: Ric Lander.

The deal makes no mention of any fossil fuels.  Instead the solutions preferred by the UN would have us perpetuate more false solutions:

None of these proposals get to the root of the problem: leaving fossil fuels in the ground. This may be a surprise to those of you who heard the Guardian proclaim the deal marked “the end of the fossil fuel age”.

The deal could have been worse – but that doesn’t make it a victory.

The summit has swelled the egos of politicians and a few NGOs: but the gulf between the stated ambitions of the Paris Pact and its effect is vast, and its the difference between millions of lives. It is a gulf that the media have largely ignored.

A momentous year in the fight for climate justice

We can no longer pretend that fixing climate change is a simple question of putting legal limits in carbon emissions and trusting that everything else will follow.

It must be about taking on vested interests and taking down the companies profiting from this crisis, about standing in solidarity with those affected by opening our borders to those who seek refuge and a home, about getting politicians to put some money up for a just transition which can re-engineer our economies in a way that eases the shut-down for those who work in our dirty industries, and it’s about doing this as a broad social movement, not a science obsessed clique, but a broad a movement with workers and the global poor at its heart.

We are beginning to put these lessons into practice, as 2015 has been a landmark year for the fight for climate justice.

The mass movement of people from Syria throughout Europe as awakened people to the reality of a world with an altering climate, with more and more people fleeing wars fuelled by drought and the ensuing lack of food and water.

The UK Government has been quick to respond by dropping bombs on the problem. This has called for climate activists to become advocates of open borders and migrant rights – and refugee and ant-war activists to join up with environmentalists.

After a shocking victory in May another wake up call came when the new Conservative UK Government binned the remaining renewable energy subsidises, wrecking years of hard won progress to decarbonise Britain’s electricity and heat generation. The more liberal and conservative of the conscientious could no longer pretend “we’re all in this together”. The environment has gotten political again.

At the start of the year the fight against fracking made huge strides as Scotland and Wales joined others globally in putting a moratorium on fracking for gas. This is a social movement doing something virtually unprecedented: stopping fossil fuels from being taken out of the ground. A victory hard won by mass community mobilisation and a dedicated alliances of community groups and NGOs.

In August 1,500 people trespassed onto, and shut down, one of Europe’s most polluting coal mines. 800 people were arrested at “Ende Gelende” (Here and no further), Germany, in an inspiring show of strength by climate activists (watch the video).

In September 350 announced that funds worth $2.6 trillion have now gone “fossil free” with UK student group People & Planet announcing later that 17 British Universities have in some form divested from fossil fuels, driven to move their money by students, staff, petitions and numerous occupations.

The whole year was a torrid time for coal companies in particular. Deprived of customers and investment they held a conference called “Mines and Money” to discuss how the industry could get out of its financial troubles.

In November the Keystone XL oil pipeline, planned to carry ultra-dirty tar sands oil from Canada, was finally scrapped: the first time a major international piece of fossil fuel infrastructure has been beaten by climate campaigners. 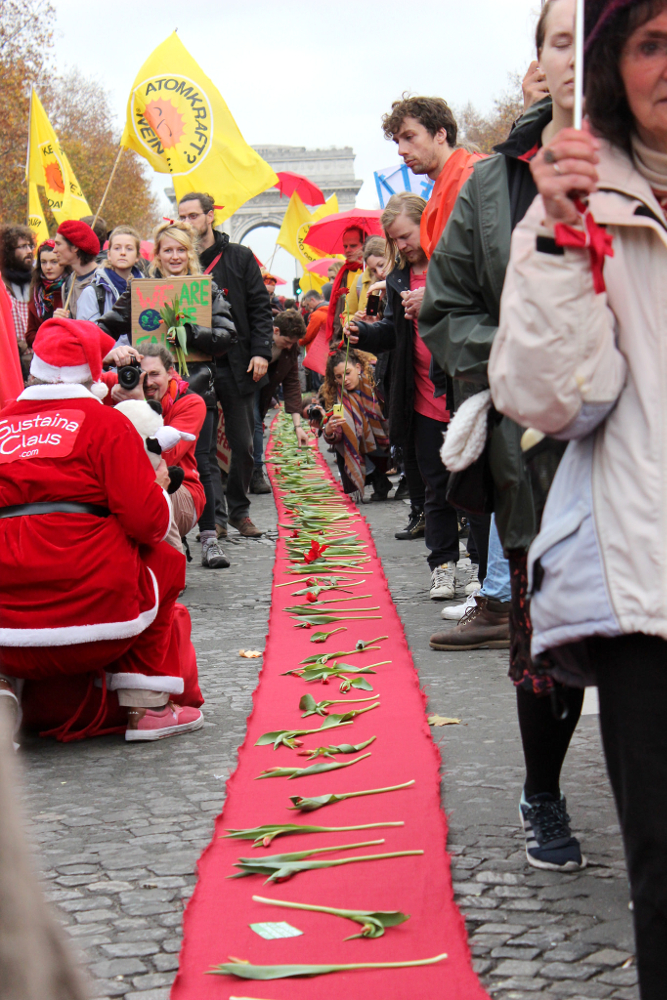 Then at the end of the year people gathered in a historic mobilisation in which 800,000 people took part in towns and cities in 175 countries around the world, marking the start of the UN talks in Paris.

At the end of the talks, determined to have the last word, 15,000 of those people converged on the streets of Paris to reclaim the city from the UN talks and draw red lines – a warning to world leaders that the climate justice movement would not let politicians negotiate away our planet.

Ordinarily this would be unremarkable, but it is just a few weeks after the deadly terrorist attacks and a state of emergency remains in place prohibiting gatherings of 10 or more people. That anything happened on the streets at all in such a highly tense and uneasy atmosphere, on streets thronged with armed police, at all is a small miracle.

The Paris Pact may be a miserable failure.

But it was a victory that we took the streets.

It was a victory that when we did, and when thousands of others marched and took direct action and got in the way this year they did so not to ask politely for world leaders to do something, but to dictate their terms.

We are the ones who will stop climate change.

We are learning how to stop fossil fuels in their tracks, to build a just transition, and to get climate justice. But perhaps the biggest victory of the year is that we’re not asking politely for the politicians do to it for us.