Fossil fuels are coming to the UN talks in Glasgow

This is a script for a workshop I wrote for the Fossil Free UK Gathering held in Yorkshire, October 2019.

Some countries, most notably the USA, have sought to derail the UNFCCC. Historically the UK has negotiated as part of the EU. Due to Brexit this will change by 2020, when the UK hosts the COP for the first time, in Glasgow.

At the 2020 COP in Glasgow there will be two weeks of formal negotiations between the government delegates. The meeting will be the first COP to take place after pledges made under the Paris treaty have ‘kicked-in’, and will assess whether the goal of rich countries giving $100 bn a year for climate adaptation and compensation for loss and damage has been reached. 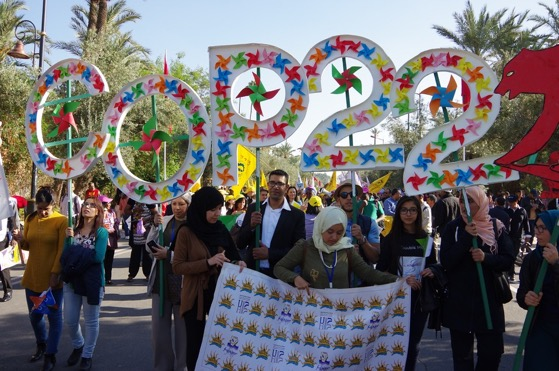 Thousands of representatives of civil society organisations from across the world will stage stunts, protests and possibly direct action to draw attention to what is, or what should be happening inside the COP. The unofficial fringe of the COP, mostly taking place outside formal UN spaces, has often functioned as the global annual meeting of the climate movement.

Fossil fuel companies and other corporate lobbyists will also be well represented inside and outside the COP.

Here at #COP24, conflicts of interest are all around! Over 150 fossil fuel representatives to be precise… It's time for #PollutersOutPeopleIn!

Let's take the #COPspiracy out of COP! 🔥 RT if you agree we need a #ConflictsOfInterest policy! You know you want to… pic.twitter.com/3oX1HPV40W

The impact of corporate lobbying on international bodies has been well documented. A recent report shows that over three quarters of external groups that the EU commission meet about climate represented the energy industry, and of those, the vast majority represented fossil fuel interests instead of renewable energy.

So fossil fuel companies and their friends will look to use the UN COP to advance their interests.

The good news is we can do this too. Over the past twenty years the climate movement had great success using the momentum and public scrutiny the COP brings to win climate campaigns.

For the 2018 COP in Katowice, Poland, global civil society agreed ‘The People’s Demands’ (we could do this for Glasgow too!), that stated:

To: Government representatives to the 24th Session of the Conference of Parties (COP24) of the United Nations Framework Convention on Climate Change,

We urge you to stand with people across the world — not Big Polluters — and immediately take steps to address the climate crisis.

Climate change is the crisis of our time. This December at COP24, you will lay out the rules to implement the Paris Agreement, policies that will affect the lives of billions of people.

The urgency of the climate crisis requires a just response centered on human rights, equity, and justice. We demand you:

The COP26 Coalition has begun to take shape prior to the 2020 COP, incorporating representatives of the UK climate movement at a grassroots level as well as funded groups. The meetings brought together activists from different parts of the country to discuss what we could achieve together and what might happen at the COP itself. Activists in Glasgow are also preparing to run their own campaigns to ‘kick fossil fuels out of the COP’.