By Amie Robertson and Ric Lander 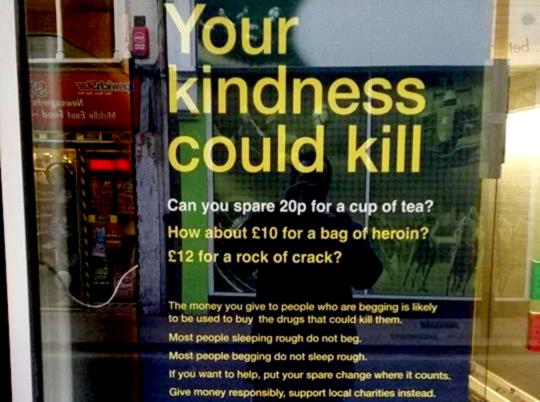 The poster asks people to donate to a local homeless fund and gives a contact for Streetlink, who offer services to homeless people.

Demonising people who are begging under the guise of helping homeless people is not a new tactic for the police, but for homeless charities the emphasis of this campaign is part of a new, worrying trend.

Flyers designed to accompany the poster campaign read “in a recent radio programme one person claimed he could earn up to £150 per day.” No further evidence is offered.

Getting the facts straight

Is it true that “most people sleeping rough do not beg”?

On the face of it, the 2011 Complex Lives study, coordinated by the UK Government Economic and Social Research Council (ESRC), appears to agree with this statement. Its comprehensive study in seven UK cities found that 32% of homeless people reported having begged.

However, the study also found that begging was typically something that people engaged in “in the middle-late phase of homelessness.” This is vital because it suggest that people are only likely to resort to begging if they have been homeless for some time. The study also suggests that people in such situations are more likely to be cut off from society in other ways, more in need of help.

What about the second claim, that “most people begging do not sleep rough”?

Again the ESRC study suggests this is misleading. It found that over time there was a close relationship between homelessness and begging: “there is a strong overlap between experiences of more extreme forms of homelessness and other support needs, with nearly half of service users reporting experience of institutional care, substance misuse, and street activities (such as begging), as well as homelessness.”

To be clear, it is not that there is no relationship between substance abuse and begging, or substance abuse and homelessness. It would not be fair to say that people begging on the street aren’t going to spend any of their money on drugs. It probably is safer to offer food, blankets or a hot drink, instead of money.

What is important here is that these posters imply that people begging are “frauds” and “not real homeless people” without offering clear evidence for this idea and with little apparent concern about the impact of pasting these false claims all over the streets.

Those involved appear to have thought little of the demonising effect of their campaign. For the sake of raising a few pennies these charities are selling the dignity of the very people they exist to help.

Surely we can help those suffering on the streets without erecting media campaigns further stereotyping an already extremely vulnerable group and stopping one of their few options for generating their own income.

We’ve all heard the stereotyping, that friend you have that tells you the supposed “Romanians” you see on the street “aren’t actually homeless”. These posters purposefully support the image of people on the streets as criminals and liars. Surely this is what we must collectively fight against?

A poster copied across England

How did it come to this? How did homeless charities hit on the idea of asking for people to donate by text, and turn away from people begging.

The poster seems to have originated from London-based Thames Reach. Their “your kindness can kill” campaign has been running since 2003, and they have extensive web-pages explaining it. 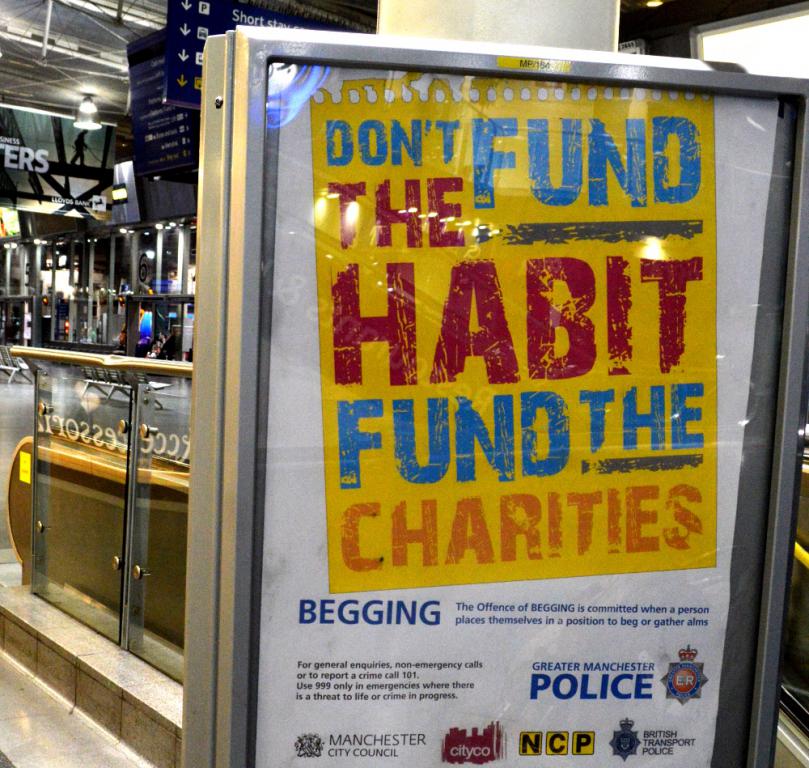 A version of the posters in Manchester. Image: Lydia James/caption]

Why are these campaigns supported?

One can’t escape the feeling that these campaigns continue to be successful primarily because they make “the rest of us” feel more comfortable doing what most people are already doing: ignoring people on the street.

One Oxford University student told a student paper: “I feel ashamed when I see tourists who come to Oxford having to walk past beggars and homeless people on the streets. What sort of impression does this give of our city and our society as a whole?”

Jeremy Swain, Chief Executive of the London charity who invented the posters, Thames Reach, told The Guardian in 2013 that he wants to stop begging because “because of the incontrovertible evidence that the vast majority of people begging on the streets are doing so in order to purchase hard drugs.” But he goes on “I have stopped giving to beggars for another reason too. It is, I’m afraid, because I’m sick of them. One of the regulars round my way, a bit clever, fag in hand, became so persistent, so intrusive, that I got quite hostile, dismissing him with the same curt tone I find myself using with cold callers who plague my phone.”

Concern that the posters exacerbate negative images of people on the street made the campaign controversial when it launched in the City of Oxford. City Councillor Sam Hollick told us: “These posters seem more focussed on preventing people asking for money in the street than addressing the problems that cause people to do it. The message of the posters reinforces the idea in people’s minds that any interaction with someone in the street asking for money is with an addict, and is somehow dangerous. This only increases the gulf between people who are homeless and those who aren’t, which can cause a hardening of attitudes against people worst hit by societies problems.”

A City Council run review of the Oxford campaign highlighted other problems. The evaluation found concern, from people begging themselves and service providers, that the campaign would “affect trust-based relationships with the beggars”, have an unfair impact on the minority of people begging who did so for necessities, and encourage people to turn to crime for income. There is also some evidence that these campaigns don’t have a significant effect on giving to homeless charities.

There is compounding evidence that homelessness is linked to volatile life circumstances which would often already cause high levels of social stigmatisation. These can lead to a variation of homeless experience where form of income has to be navigated outside safety of permanent or even regular residence.

Homogenising homeless experiences into one stereotypical understanding is not only patronising but ignorant.

Further categorising those self identifying as homeless into ‘deserving’ and ‘undeserving’ only propels the stigmatisation of those in the most vulnerable positions, often without the connections to such caring organisations, and indeed pushes them further away from any kind of inclusion into society.

There is not enough social housing in Britain; cutbacks to public sector spending is closing some of the most critical care and rehabilitation centres; we are becoming the imprisonment capital of Europe; and the welfare state is being violently eroded whilst at the same time wages have never been so low and insecure.

This is a way of constructing society that WILL make people homeless, and yet charities on the front line of care provision for those within this traumatic experience are concerning themselves with making money by demonising those they seek to represent.

If this is the true face of austerity then God help us.

Or better yet, let’s help each other. Suspicious and dividing narratives like these only serve to enforce a more individualistic society where governments can further enforce draconian policies in the knowledge that our communities are fractured and in judgement of each other.

Giving your pound to those begging on the street will not solve anything. In fact the best that money will do is absolve your guilt for the next ten minutes until you see that someone else that has been forced into the street within this system which you remain economically privileged within.

However, as a man begging outside Haymarket Station, Edinburgh, so rightly put it, “it’s no about wanting all your money, but at least see me as a person.” Stopping to give someone the time of day on the street is a radical act of change in a society that demands we see each other as competition for the recourses those in authority refuse to give us. When we acknowledge that specific people on the street will often have experienced violent circumstances and stigmatisation within their daily life, it’s not just a radical act, but a way of resisting their further subjugation.

They are not just ‘beggars’, they are our brothers, our uncles, our aunties and our mothers, and their lives did not begin when they sat down and asked you for a spare bit of change.

I do not believe our kindness could kill, but rather that it could be transformative. Let our daily conversations become the building blocks for community organising where those affected by such issues are brought to the front line of grass-roots resistance against discrimination, and we work together to create an alternative society that puts the resources available in the public hands.

Oh, and what happened to that poster in the Sainsbury’s in Ipswich?

After the picture was shared widely on Facebook, Wesley Hall, a volunteer for Help the Homeless called up the shop asking for it to be removed. Although only put up that morning, the manager agreed to take the poster down.