By Ellen Young and Ric Lander 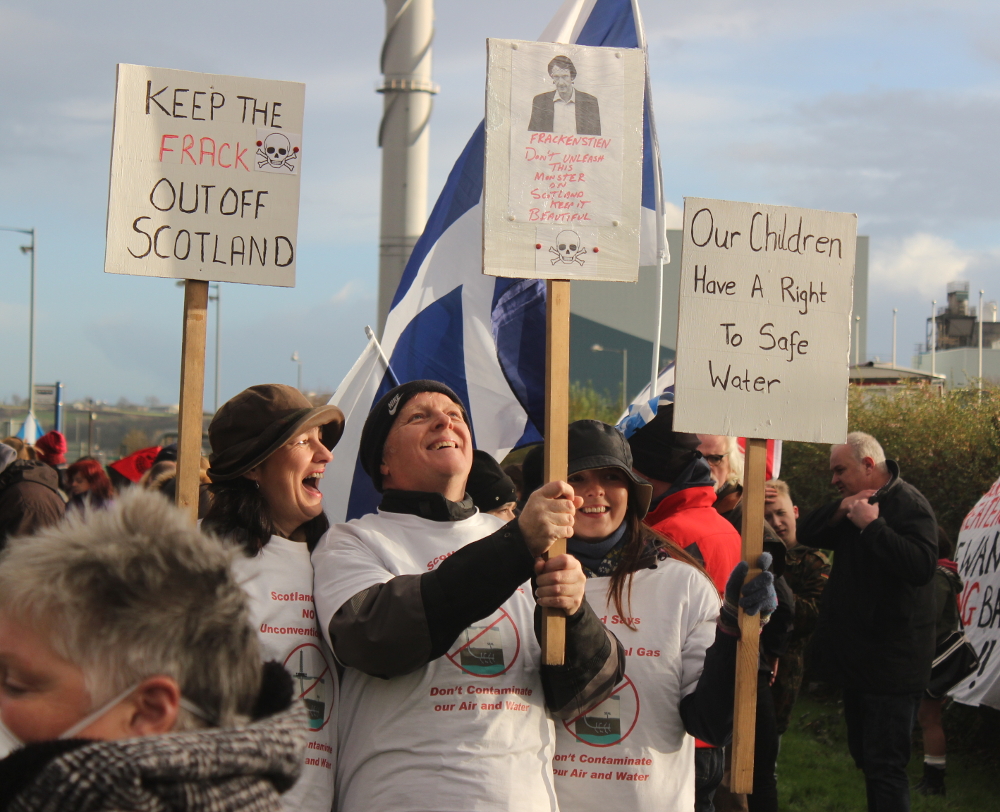 Community groups have led the way on the path to the moratorium on unconventional fossil-fuels in Scotland, and continue to do so in the ongoing struggle for a full ban. The effective grassroots campaigning of these communities, who have fought the Scottish government and unconventional gas companies, is an inspiring story for those across the UK and the rest of Europe.

It is not in the nature of national governments to give much thought to the views of communities when planning energy infrastructure. Little of Scotland’s current renewables bounty goes to communities and in the energy boom before that, Scotland’s 20th century North Sea oil bonanza, communities looked on as local councils vied with each to host incoming oil multinationals.

Scotland’s anti-fracking movement has changed all that. People are demanding, not just to be consulted, but to take decisions themselves. How did this happen?

Concerted campaigning by communities has been gradually ramping up the formal political debate on unconventional gas for some years. The ground was laid by groups such as Concerned Communities of Falkirk and Friends of the Earth Scotland who developed considerable technical knowledge and local support focused not around fracking, but a ruling over coal-bed methane drilling. The Falkirk community secured thousands of objections to the proposals and when the local government dithered on the case, a public inquiry was called: a tense and costly legal battle which pitched big industry against local people. Unconventional gas stayed in the news as new shale drilling licences were issued, raising the spectre of fracking in central Scotland.

Throughout 2014 Scotland was getting wise to the clever tricks of industry barons and politicians who would say one thing to business and another to the voters. The story of what was going on in Falkirk was passed around from doorsteps to public meetings to TV debates and back. In Scotland’s independence referendum debate, people were angry about having policies imposed upon them from London, but they were also getting angry about having policies imposed upon them from anywhere. Scotland’s independence debate created new local political spaces, and fracking and Falkirk’s fight were just the kind of injustices that people wanted to talk about.

Scotland’s flourishing town hall democratic spirit did not end with the “No” vote on Scottish independence. Instead newly created groups like the Radical Independence were chomping at the bit for a new way to exert their power. They almost brought down a 300 year-old union of nations – surely they could do away with fracking. The fight of a few plucky campaigners was turning into a true social movement.

At the same time, immediately after the referendum, political parties negotiated new powers for the Scottish Parliament to approve on-shore oil and gas licences. No longer could any excuse be made that fracking was being “imposed” on Scotland by the UK Government. There was no ambiguity: fracking could now be stopped at home.

Into this fray Scotland’s two biggest political parties installed new populist leaders: Jim Murphy for Labour and Nicola Sturgeon for the SNP, Sturgeon with a new focus on inequality and Murphy seemingly hell-bent on supporting any policy that sounded popular (his first policy announcement was to remove the ban on alcohol at football matches). More than ever both parties were keen to put as much distance between themselves and that of the Conservative-led, pro-fracking, UK Government.

Thousands of letters were signed to SNP and Labour leaders. Local MPs and MSPs were lobbied. Events and conferences were organised. Demonstrations were held at oil refineries. Communities were being very noisy, and their voices were being amplified by a newly attentive Scottish media.

The pieces moved at the end of January.

Scottish Labour announced a new policy to give local referendums on fracking proposals, the SNP immediately moved to support a UK-wide moratorium, and three days later the Energy Minister Fergus Ewing told the Scottish Parliament: “from today there will be a moratorium on all unconventional oil and gas extraction.”

Two years ago the message local communities heard was “don’t worry about fracking, the government is taking care of it.” Now Scottish politicians are outdoing each other to see who can claim to respond best to the community’s views.

Leading the way have been the Concerned Communities of Falkirk. In 2012 they co-created an objection letter to a coal-bed methane drilling proposal through large democratically-run public meetings. The letter was signed by over 2,500 residents and contributed to the largest response to a planning application the local council had ever seen. The resulting escalation led to a public inquiry: when the Government Minister told them “communities are capable of representing themselves” they raised £70,000 for a lawyer to oppose the gas company’s top legal team. They also co-created a community charter setting out “all the things in our local area which residents have agreed are fundamental to the present and future health of our communities” and are working on creating a community chartering network, where the ‘cultural heritage’ they define can be defended under European law to help ensure sustainable development in other communities.

Falkirk’s lead has been taken up by communities at risk from across the country.  The mobilisation of large numbers of people is now a clear characteristic of the movement in Scotland.

As stated, the referendum on Scottish independence was critical: with awareness spread through new media and public debate, and new groups and spaces for debate and action born.  Frack Off UK, a resource and contact point for activists across the UK, reported ‘in the weeks following the referendum there were new anti-fracking community groups forming daily in Scotland.”

There are now over 50 community groups across the central belt of Scotland, some formed proactively over shale gas fields, others as issue-based campaign groups in cities and elsewhere. As well as helping achieve huge national policy shifts, new groups and activists have taken forward local fights from longer-active campaigners to tackle the industry on individual planning applications.

Although highly decentralised, community groups have also come together to collectively articulate their shared concerns at crucial points in the campaign. The Broad Alliance, which is a coalition of 30 community groups, published a number of influential open letters in the national press demanding a moratorium. They have also successfully demanded to be part of the stakeholder consultation process of the moratorium, originally reserved for industry and established NGOs.

Right now communities are making their impact on the ‘engagement’ efforts of the companies.

Ineos, the biggest player in the Scottish unconventional gas industry, is carrying out a ‘community engagement’ tour meeting residents in libraries and at one-to-one meetings, and promising to share £ 2.5 billion of its profits with communities who accept drilling in their vicinity.  As well as previously dismissing concerns about fracking, Ineos are deeply unpopular following a recent union battle in which billionaire company-owner Jim Ratcliffe threatened to shut Scotland’s largest oil refinery.

The new narrative of engagement is nothing more than a thinly disguised PR exercise, and offers nothing in the way of meaningful engagement with communities. The result: it has been followed at every stop by activists and residents asking detailed technical questions, holding protests, and staging walk-outs.

Engagement from companies and weak promises of a regulated fracking industry have been rejected in Scotland. People now expect communities to have their say. How does the Government see this happening?

When announcing the moratorium, the Scottish Government also all announced an inquiry on potential public health impacts and a public consultation. There are initial concerns that the health inquiry may be seriously rushed, and there are troubling questions over how long-term impacts like cancer rates can be honestly assessed. Public consultations are often tokenistic affairs, and communities will need to mobilise strong support to make an irrefutable case.  In an aborted consultative effort in 2013 the Scottish Government tried to placate initial concerns about drilling by proposing loose “buffer zones”, but opted not to engage community groups on their size, instead delegating the decision the drilling companies themselves.  Much of this campaign has been bitterly hard-fought, and communities are well aware that the moratorium could disappear very quickly if it the debate cools down.

There is much to be done to achieve a complete ban on all forms of unconventional fossil-fuels in Scotland.  The moratorium is a huge achievement, and so is the level of mobilisation on this issue.  The people have become powerful, but the industry, and their government insiders, have not yet been beaten.

Resistance beyond the border

If Scotland completes its journey to a ban on fracking and unconventional oil and gas, will the rest of the UK follow?

There has already been a significant spillover effect to the debate in Wales, with restrictions on fracking promised shortly after Scotland’s policy shift.

Experience in England is more sobering. A local moratorium in Blackpool, which followed earthquakes caused by fracking, lasted less than a year. Opposition is widespread and angry, but is largely focused on local fights. The UK’s biggest political parties were broadly pro-fracking going into May’s General Election, and bolstered by an unexpectedly strong election victory, the Conservatives are likely to run one of the most pro-fracking governments in Europe. The SNP’s landslide victory in the General Election, winning all but three seats in Scotland, provides hope for some, yet despite imposing the moratorium in Scotland their stance on fracking still remains ambiguous and the impact they could have on a Conservative majority government remains uncertain.  Scottish communities can, and will, inspire battles in the rest of the UK, but they cannot lead them.

In Europe, despite moratoriums in France and Germany, the level of mobilisation in Scotland is still seen as something to aspire to.  This hard working and highly effective Scottish community movement can clearly be a leading light to many others globally.

Activists who began fighting drilling proposals were shocked into action by stories of acute health and environmental impacts in America and Australia.  The movement those campaigners build is now as much about sovereignty and democracy.  What other victories can this inspire?